‘Color is fooling us all the time. All the time, like women do, you see, life is interesting.‘ Josef Albers

Josef Albers was born in Bottrop, Westphalia, Germany in 1888. From 1905-8 he studied to become a teacher in Büren, and went on to teach children in primary schools around Westphalia from 1908 and 1913. At this time, he taught “everything — reading, writing and arithmetic”.

During this period he realised that he wanted to specialise in teaching art, and enrolled in Berlin’s Königliche Kunstschule in 1913 with this in mind. He qualified as an art teacher in 1915.

Over the next few years whilst teaching art, Albers developed as a figurative artist and printmaker. He furthered his studies first part-time at the Kunstgewerbeschule in Essen where he studied lithography and then at The Royal Bavarian Art Academy in Munich, where he studied drawing with Franz Stuck and attended Max Doerner‘s course in painting techniques. 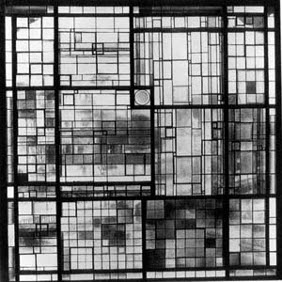 In 1920, Albers enrolled at the prestigious Weimar Bauhaus school, which concentrated on the modern integration of architecture, fine art, and craft. Here, Albers concentrated on glass painting and took a preliminary course under the direction of Johannes Itten.

In 1922, he completed his preliminary training, was appointed a Bauhausgeselle (‘journeyman’) at the Bauhaus and was put in charge of the Bauhaus glass workshop. 1922 was a memorable year for Albers in another way for it was the year he met Anneliese ‘Anni’ Fleischmann, his future wife.

In 1923, after Itten left the Bauhaus, Albers began to teach the Vorkurs, the preliminary design course. Josef and Anni married on May 9 1925. Later that year when the Bauhaus moved to Dessau, the Alberses moved with it and Josef is appointed Bauhausmeister (‘Bauhaus Master’) teaching alongside Paul Klee and Wassily Kandinsky. 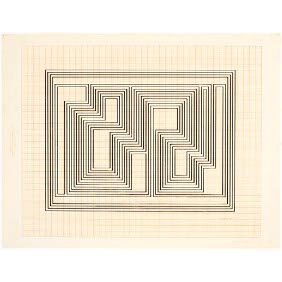 After Nazi regime harrassment in 1933 as part of its campaign to suppress “degenerate art” (‘entartete kunst’), Albers joined the remaining faculty members in officially closing the Bauhaus.

Soon after, Albers was invited to teach at the newly-founded Black Mountain College near Asheville in North Carolina, USA. Albers emigrated in November of that year, joining the Black Mountain faculty, where he headed the art department and ran the painting program until 1949. Josef and Anni became United States citizens in 1939.

Black Mountain College was a liberal arts college which attracted artists from around the world through its reputation as a radical artistic community. Using his experience from the Bauhaus school, he was able to enlighten his students to modern European artistic concepts. His students included Robert Rauschenberg, Cy Twombly, Ray Johnson and Susan Weil. During this time, Albers continued successfully to develop his own art with more than twenty solo shows in American galleries. 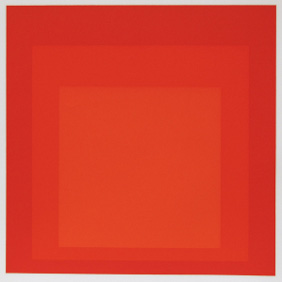 “Anyone who predicts the effect of colors proves that he has no experience with color.”Josef Albers

Albers resigned from Black Mountain in 1949, spending some time teaching in Mexico University. In the Autumn of 1950, he accepted an invitation to head the Department of Design at Yale University and Josef and Anni relocated to New Haven, Connecticut. Albers’ students at Yale included Richard Anuszkiewicz, Eva Hesse and Julian Stanczak.

While lecturing at Yale, Albers began his most famous body of work, the series “Homage to the Square”, which would become a body of more than a thousand works executed over a period of twenty-five years. The series was based on a mathematically determined format of several squares, which appear either to be overlapping or to be nested within one another. This geometric abstraction was Albers’ brilliant and world-famous template for exploring the subjective experience of color. 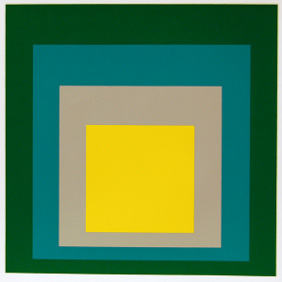 Albers retired from teaching at Yale in 1958 aged 70 but continued as a visiting critic until 1960. He also continued to teach, travelling throughout the United States delivering guest lectures at numerous colleges and universities.

In 1962 Albers was awarded a Graham Foundation fellowship and an Honorary Doctorate in Fine Arts from Yale University, one of the first of many honorary degrees he was to receive over the next fourteen years of his life.

From 1965 to 1967, an exhibition of Homage to the Square organized by New York’s Museum of Modern Art, traveled through the United States, South America and Mexico. In 1971, Albers became first ever living artist to be honored with a solo retrospective at the Metropolitan Museum of Art in New York.

Albers lived and worked in New Haven, Connecticut, alongside his wife and fellow-artist Anni Albers, until his death on March 25, 1976. 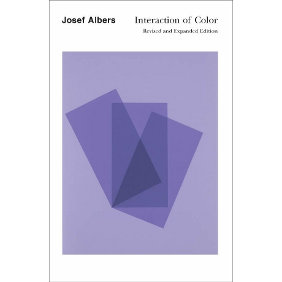 “Instead of art I have taught philosophy. Though technique for me is a big word, I never have taught how to paint. All my doing was to make people to see.” Josef Albers

Originally published 1963 as a limited edition, The ‘Interaction of Color’ was intended as a guide for artists, art teachers and students. It quickly became a classic design school text and remains as important to this day as when it was first published. The book contains a beautifully written and illustrated, consise statement of color theory – although Albers always maintained that he had not come up with, and was not attempting to put forward, any new theory of color, only a way of studying it.

“In my color book there is no new theory of color. But, in it, there is a way to learn to see.” Josef Albers

The 2006 expanded and revised edition can be purchased here. 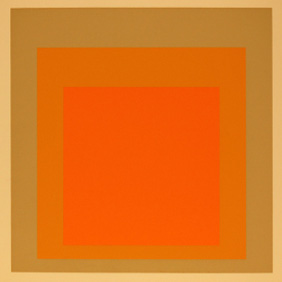 Josef Albers was both an artist and a teacher and has played a significant role in the history of 20th-century art. One of the most original of the 20th century painters, Albers is represented in some of the world’s best art museums, including the Metropolitan Museum of Art, New York; Chicago Museum of Contemporary Art; Tate London and Hamberg Kunsthalle, among others.

His theories about art and color were, and still are, powerful influences on a whole generation of artists, and his work, particularly with regards to perception and colour, was undeniably one of the major influences on the Op Art Movement.

In 1971 (nearly five years before his death), Albers founded the Josef and Anni Albers Foundation, a non-profit organization he hoped would further “the revelation and evocation of vision through art.”