An Era of Experimentation and Innovation 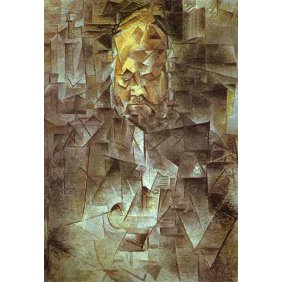 After the turn of the century and the work of the new young painters such as Picasso and Matisse academic painting based on perspective faded as a major force in the art world, though it never really disappeared.

The floodgates however had been opened and the abandonment of perspective led early 20th century artists to experiment and innovate like never before, taking new directions in both painting and sculpture.

Out of this new wave of experimentation and innovation came several new and important cultural and artistic movements – dadaism, surrealism, abstract expressionism… – one often followed by another in quick sucession. 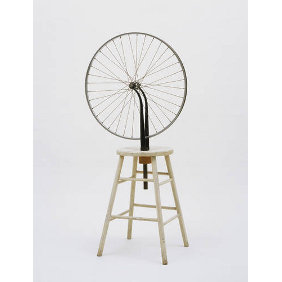 Dada or Dadaism was a cultural movement that began in Switzerland at the time of the first World War in reaction to what the artists of the time saw as the horror and stupidity of the war. These artists began to question the concepts of art and instead found beauty in everyday objects. The declared purpose of the movement was to make clear to the public at large that all established values, moral or aesthetic, had been rendered meaningless by the disaster of the great war.

The most famous of the Dadaists was Marcel Duchamp (1887-1968). Duchamp preached anti-art with a vengeance and would put his signature on ready-made objects like snow shovels and bottle racks and exhibit them as works of art. Other famous Dadaists include Max Ernst (1891-1976) and Hans Arp (1887-1966).

Often called nihilistic, Dada was an extremely important movement, laying the foundations for Surrealism and it was a major influence on later movements such as Pop and Op Art. 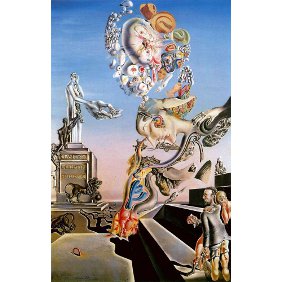 Surrealism, the sucessor to Dada, involved many of the same artists from that earlier movement – Max Ernst for example. It was an artistic movement based heavily on the unconscious mind and the importance of dreams. Surrealist theory was heavily laden with concepts borrowed from psychoanalysis, particlarly that of Freud.

Leader of the Surrealists, Andre Breton (1896-1966) stated in the Surrealist Manifesto (1924) that Surrealism was “pure psychic automatism, by which one proposes to express, either verbally, in writing, or by any other manner, the real functioning of thought.”

Notable and well known surrealists include the (Spanish) Catalan artists Joan Miro, one of the first artists to develop automatic drawing as a way to undo previous established painting techniques, and the brilliant and eccentric Salvador Dali.

The pioneer of Abstract Expressionism was Arshile Gorky (1904-1948), an Armenian who moved to America at 16, and is thought of as the single most important influence on the movement’s other members.

Sadly Gorky died aged 44 in 1948. His principal heir turned out to be Jackson Pollock (1912-56), who in 1950, created the huge and original picture ‘One’, mainly by pouring and spattering his colours, instead of applying them with a brush. Pollock regarded paint itself, not as a passive substance to be manipulated at will, but as a storehouse of pent-up forces for him to release. 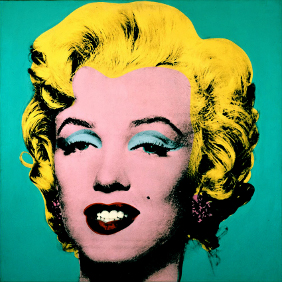 Pop Art began in London in the mid-1950s, but from the very start its imagery was largely based on American mass media, which is why it is often thought of as being a movement that started in America.

Unlike Dada, which was motivated by a disgust at present-day civilisation, Pop Art instead embraced commercial culture as its raw material; as an endless source of pictorial subject matter.

In Pop Art, we saw a return to realsim and a move away from abstraction. Pop Artists had several motivations: to reflect the times they lived in; to find art in commonplace every-day objects – soup cans, hot dogs, cars and so on and to reflect the dynamic world of the media, film, advertising and comic books. 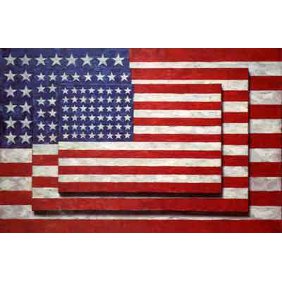 Perhaps the most important of the American pioneers of Pop Art is Jasper Johns (1930-present). Born in Augusta, Georgia, Johns studied for a short time at the University of South Carolina before moving to New York in the early 1950s.

In New York, Johns met and befriended the artist Robert Rauschenberg, and together they explored the New York Art scene. Johns travelled to Philadelphia to see an exhibition that included work from Dada artist Marcel Duchamp. Johns became fascinated by his work and particularly the way in which he challenged what could and could not be considered art with his ‘readymades’ series.

Johns began his artistic career by painting, meticulously and very precisely, such familiar objects as flags, targets, numerals and maps at the exact point in time when the modern art world was looking for the successor to the pure emotionality of the Abstract Expressionists. At his first exhibition, the Museum of Modern Art bought three of his works. 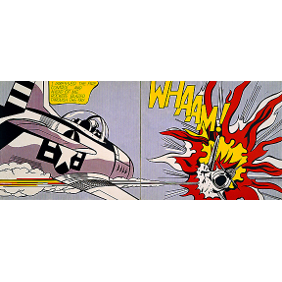 Roy Lichtenstein (1923-) is considered to be the most sophisticated of the major Pop artists in terms of his analysis of visual convention and his ironic exploitation of past styles.

Having gained a Bachelor of Fine Art and Master of Fine Art from Ohio State University, Lichtenstein for a period painted in the style of Abstract Expressionism and Cubism. His first Pop Art piece came in 1956 – a picture of a dollar bill. It wasn’t until 1960/1 however that he started to paint in the style for which he is known.

Lichtenstein took as his subject matter comic strips – or, more precisely, the standardized imagery of comic strips devoted to violent actions and sentimental love. Lichtenstein made us think for the first time about the rigid conventions of their style and how it is possible for these types of image to be so instantly communicable. 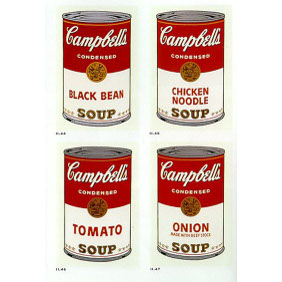 By the time of his death, Andy Warhol was one of the most prolific and well-known artists the world had ever seen. Born Andrew Warhola in 1928, the son of Slovakian immigrants to the US, he became one of the most controversial figures of his generation.

Warhol started his career as a commercial illustrator and was highly successful, winning numerous awards for his work from the Art Directors Club and the American Institute of Graphic Art. In the late 1950s he devoted more of his time to art. In 1962 he produced his series of Campbells soup cans, in the process creating a sensation in the art world that launched Warhol as a celebrity.

Warhol experimented in media such as film, sculpture, paint, and silkscreen, but perhaps his greatest work was the invention of himself as an international celebrity and pop culture icon.