Joanna Potratz, who lives and works in Poland, started creating her art in a difficult period in her life in which she was unhappy and out of work.  Sitting down with just a pencil, ruler, fountain pen and paper she started creating geometric black and white pieces.  At that time she says she had no experience of Op Art; the ideas and style just came to her and it wasn’t until much later that she realised that what she was drawing would be called Op Art.

Joanna says: “Each image took several hours of intensive manual work…  Often I didn’t have any firm idea about the final effect before the piece was finished, so I was often surprised by what that effect was.”

Joanna didn’t study art formally, just finishing ‘typical college’.  “I did all my works not knowing what style of art it was – in the same way Molier’s Monsieur Jourdain didn’t know he spoke in prose.”  Now 38, Joanna has been creating Op Art for the past 20 years.

“I didn’t have an internet or computer until last year so I was not very well informed.  It was only when I got online that I realised what it was that I had been drawing for the past 20 years!  I work on A4 Bristol paper sheets of using a compass (drafting), a ruler, a pencil and a black ink fountain pen only. When I have an idea for a new image I take a pencil and ruler and start to sketch it out.  The next stage involves filling in the fields with a fountain pen.  Any little mistake disqualifies the piece and means I have to start again from beginning which can be a very frustrating process.”

“I had no inspiration from other artists simply because didn’t know any until last year when I discovered Op Art.  Since then my interest in the art of others has grown and I often visit art galleries.”

“My long time love is astronomy and watching the sky.  I love seeing a sun dog (parhelia) or other halo. The colours of the sky near the sea in North Poland where I live are the most beautiful art I have ever seen.” 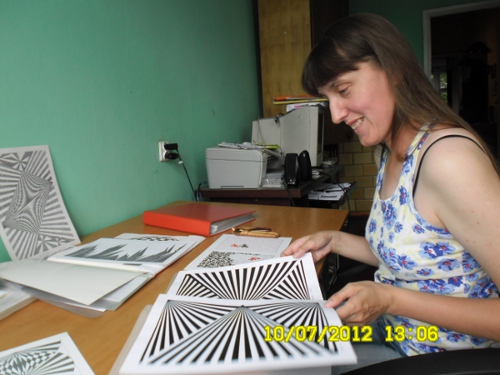