This month, we’re delighted to feature the work of Mark Dagley. For the past 20 years Mark has “engaged the fundamentals of abstraction by creating geometric paintings that have the ability to induce psychotropic perceptual experience”. Though Mark is a generation removed from the original Op Artists, he is a well-known and respected practitioner of “neo-optical colour abstraction”. 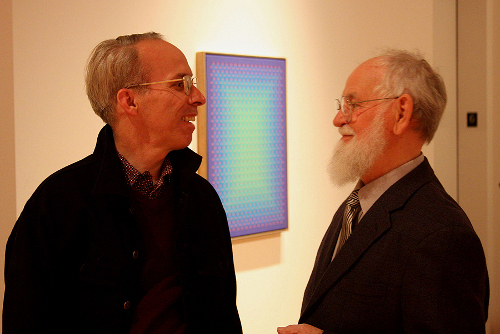 Mark has exhibited widely at galleries, foundations, and museums throughout the United States and Europe since the mid-1980s. In 1999 his work was included in “Post- Hypnotic”, a three year travelling museum exhibition which examined the resurgence of optical effects in the work of twenty-eight painters from the United States, Europe and Japan. His most recent exhibitions were at Minus Space (2008), Nyehaus (2007), McKenzie Fine Art (2006), Up & Company, (2005). 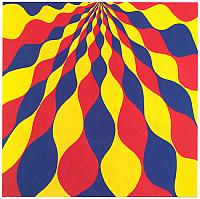 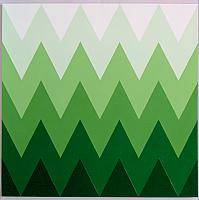 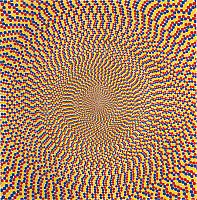 The path to Mark’s current work began in the early nineties with a reduction in his palette to the minimal set of red, yellow, blue, black and white.

A series of paintings – ‘Primary sequences’ – created using this minimal colour set and based on simple geometric shapes ensued, but Mark felt that there was something missing; something that had been discarded from the foundation of 20th Century Geometric Art: classical perspective. Starting first with one-point perspective line paintings using the primary colour set, Mark gradually turned his attention to the dead centre of a square canvas, first tracing dots in pencil with a circle template as one long spiral string and then ‘painting in’ these dots using his minimal palette and creating in the process a fascinating optical effect.

“Funny, I never set out to make Op Art. As far as my work is concerned, I much prefer the term systematic painting. The opticality is just the sexy part, the by-product of the real issue at hand, which is structure.” 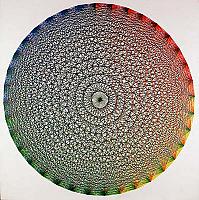 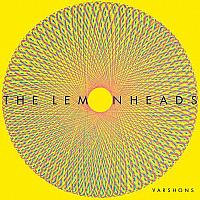 For fans of the Lemonheads… that’s Mark’s painting on the cover of ‘Varshons’. If you’re interested in purchasing any of Mark’s work, there are some very inexpensive prints here. To find out more about Mark and his work, look here. A video of Mark’s Op/kinetic sculpture can be found here