“I’m interested in making something romantic out of a very, very mechanistic geometry. Geometry and color represent to me an idealized, classical place that’s very clear and very pure.“ Richard Anuszkiewicz 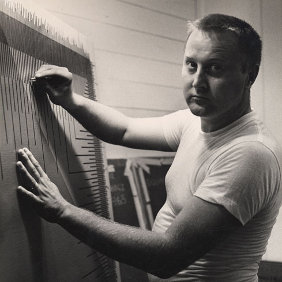 Richard Anuszkiewicz in his studio 1965

Richard Anuszkiewicz was born in Erie, Pennsylvania, USA in 1930.  Both his parents were originally Polish but had met in the USA. Anuszkiewicz was interested in art from an early age and this was something that was encouraged by his father.

After attending a series of parish run schools, Richard transferred to Eire Technical High School aged 14 (1944).  It was there that his fascination with art and drawing was allowed to develop, as he was able to draw each day for several hours.  His exceptional talent was evident even during this time – winning a major artistic award as a senior in 1947.

In 1948, Anuszkiewicz gained a place at the Cleveland Institute of Art where he began to become interested in abstraction and the underlying design process behind creating a work of art. 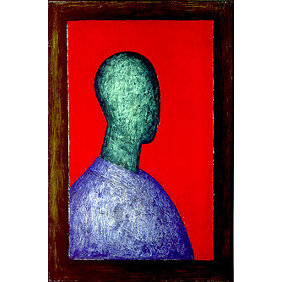 Anuszkiewicz graduated from the Cleveland Institute of Art in 1953 with a Batchelors in Fine Art.  By this time he was already receiving formal recognition of his immense artistic talent.  During his final year at Cleveland, the National Academy of Design awarded him a Pulitzer Travelling Scholarship.  The award gave would have allowed Richard the funding to travel to and study art in a European city, but he instead chose to stay in the USA.

At the time, Josef Albers was the head of the Design Department at Yale University. Anuszkiewicz was fascinated by the work Albers had done with colour, and felt that this element was something that would further enhance his work.  He talked his decision over with his tutor at Cleveland and was accepted at Yale, where he studied under Albers, from 1954-55, graduating with a Masters in Fine Art.  Interestingly his room-mate at Yale was another highly influential Op Artist, Julian Stanczak. 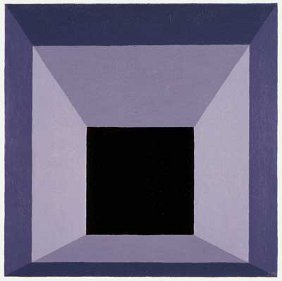 Albers didn’t use a formulaic set of rules in his teaching, instead encouraging his students to look objectively at their work and to work out what was and wasn’t happening.  Anuszkiewicz learned from Albers about form and colour, the Bauhaus Movement, the color theory of Paul Klee, the Impressionists and Post-Impressionists masters like Cezanne and as he began to appreciate these movements and artists more and more, their influences began to become apparent in his work.

Anuszkiewicz, under the influence of Albers and his teaching, began to abandon the realism of his previous work.  “Self-Portrait” (shown above) painted whilst at Yale in 1954 is a good example – painted in vibrant colours, Anuszkiewicz has reduced himself to a flat abstract figure.

At Yale, Anuszkiewicz became fascinated with the current thinking on the Psychology of Perception, reading extensively and keeping up to date on the thinking of the time. 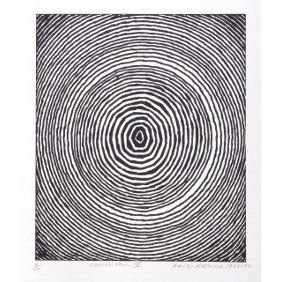 After graduating from Yale, with a view to supplementing his income from art with teaching income, Anuszkiewicz returned to Ohio for a year, where he studied for a Batchelors in Science in Education at Kent State University (1955-56). (He later held visiting teaching positions at Dartmouth College, the University of Wisconsin-Madison, Cornell University, and Kent State University).

Whilst at Kent, he was offered his first solo show by the Butler Institute of American Art in Youngstown.  During this time at Kent, he has later said that he began to paint ‘seriously’ and began to develop the style for which he is known, making extensive use of contrasting colours and form.

After he graduated from Kent State University, Anuszkiewicz worked painting houses with friends for the summer. In September, he quit, rented a flat in Cleveland and started painting for real. 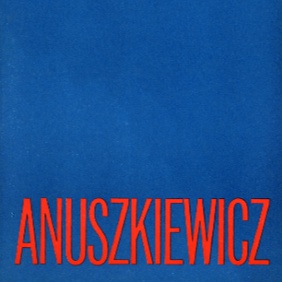 In the Spring of 1957, Anuszkiewicz made the move to New York, taking with him much of the material he had created over the preceding six months.  After a short time off travelling in Europe, Anuszkiewicz began the process of taking his work around the New York galleries.

There was some interest in his work, but at the time, the strong colours and hard-edged style were seen as a little bit ‘difficult’ for most.  The breakthrough came from The Contemporaries Gallery in the autumn of 1959.  The gallery director of the time, Karl Lunde, had seen some of Richard’s work and sought him out.  He was offered a solo show at the gallery in early 1960.

That Anuszkiewicz was going to be an important artist became clear in the final week of the show.  Towards the end, a representative of the Museum of Modern Art walked in and purchased one of his paintings. Key private collectors rapidly followed suit. 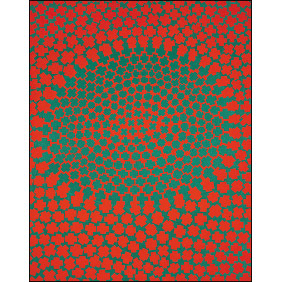 “Fluorescent Complement” – the work purchased by MoMA – was exhibited there later that year alongside a work of the ‘father of Op Art’, Victor Vasarely.  A second show at The Contemporaries Gallery followed in 1961. Museums and Galleries were really beginning to show a lot of interest in Richard Anuszkiewicz’s work.  The important and influential 1962 “Geometric Abstraction in America” exhibition from the Whitney Museum of American Art featured works by Anuszkiewicz.

He was again exhibited at MoMA’s 1963 exhibition ‘Americans’ where he displayed 5 paintings and received much of the  attention from the critics of the time.  As a result of the exhibition, Time Magazine ran a feature on him which featured a full page reproduction of ‘Plus Reversed‘ (1960 – shown right) and the brilliant ‘Knowledge and Disappearance’ (1961). In 1964, Life magazine ran a feature on him in which they called him the ‘new wizard of Op’. 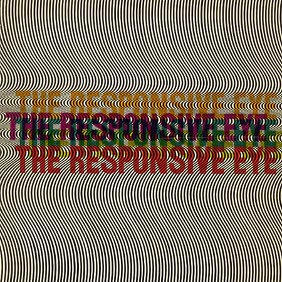 The defining exhibiton in the history of Op Art, and one of the major contemporary art events of the decade, was MoMA’s ‘Responsive Eye’ exhibtion from 1965.  The exhibition had been conceived (although not titled) and announced several years earlier in 1962, with a view to documenting the development from Impressionism to the exciting new trend of a “primarily visual emphasis”. The historical development was abandonded along the way, as “so rapid was the subsequent proliferation of painting and construction employing perceptual effects that the demands of the present left no time nor gallery space for a retrospective view” (curator William Seitz)

The major Op Artists of the time showed their works there, including Bridget Riley and Victor Vasarely.  The exhibiton, featured Anuszkiewicz as one of the outstanding and notable American Op artists of the time.  Op Art had arrived and so too had Richard Anuszkiewicz.  The public loved the exhibition and Op Art inspired designs began to show up in popular culture – Op Art advertising and Op Art fashion and design abounded. 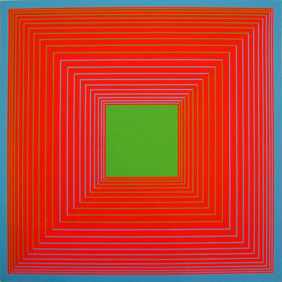 Richard Anuszkiewicz had already been taken under the wing of wealthy clothing manufacturer and art collector Sidney Janis prior to the Responsive Eye in early 1965. Janis was a highly influential gallery owner, known for the quality of the artists he represented, including Josef Albers, Kline, Pollock and Rothko.

Janis quickly put Richard into the gallery’s exhibition line-up, giving him a solo show in late 1965. It was there that Anuszkiewicz showed his Sol I and Sol II paintings – the first two of an ongoing series that he still continues today. The show was an enormous success and the paintings almost sold out.

Soon after Janis exhibited his work in the influential and important ‘Pop and Op’ exhibition alongside notable artists of the time such as Josef Albers, Ellsworth Kelly, Roy Lichtenstein and Andy Warhol. 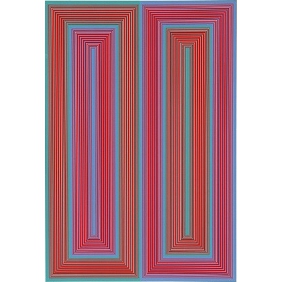 During the late 1960s and 1970s, Anuszkiewicz’s meteroric rise continued.

In 1965 he exhibited at Corcoran Biennial in Washington, DC and was included in American Art Today at the New York World’s Fair. In 1966, the Cleveland Museum of Art organised a major retrospective of his work.  He was then featured in American Painting Now at the United States Pavilion at Expo 1967 in Montreal.  His relationship with the Sidney Janis Gallery continued; Anuszkiewicz had further solo shows at the gallery in 1967, 1969, and 1973.  Both the public and the critics loved his work: John Canaday called the 1969 Janis exhibition “dazzling” in the New York Times.

In the late 1960s, Anuszkiewicz started to create sculpture, often taking the form of painted wooden cubes, sometimes on a mirrored base. In the early 1970s, Anuszkiewicz developed his primarily ‘square’ based painting style to one primarily based on rectangular forms. 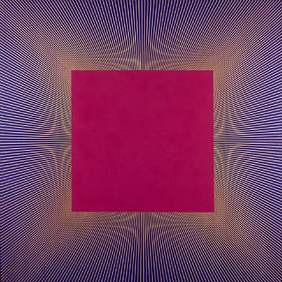 Anuszkiewicz continued to be widely exhibited throughout the 1970s and 1980s although his last inclusion in an exhbition at the Janis gallery came in 1975; Janis had moved on to representing the photo-realists.

Over the same period, he developed his use of colour in his ‘Spectrals’ series, making extensive use of ‘simultaneous contrast’ – where two colors, side by side, interact with one another to change our perception of them accordingly. He also concentrated on his ‘Centered Square’ series of works, a good example of which is shown right.

In 1981, in the same year that Riley found inspiration there, Anuszkiewicz visited Egypt and was inspired by the vibrant colour he was confronted with.  This inspiration led to his famous “Temple” series of works. 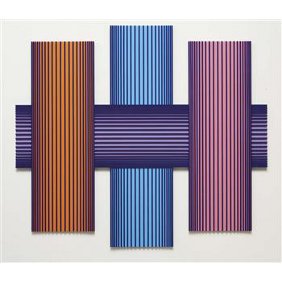 Around the mid-1980s Anuszkiewicz started to produce works in his Translumina series, which saw him starting to work with wood constructions in low relief, often limiting the colours he used to a mere two, primarily black and one other colour.

His work continued to evolve as each year went by.  1990 saw him creating work that had been laser cut from sheets of aluminium or steel painted typically with a single primary colour, or from welded bronze tubing and stainless steel.

In 2000, he created a series dedicated to Mondrian – ‘For Mondrian’ – made from painted steel.

2011 saw him revert to more traditional media – acrylic on canvas – to complete a series of works based on the Twin Towers.

Richard Anuszkiewicz is alive and well and painting today.  His work is still widely exhibited and can be found in galleries and museums around the world.