David Buckden is an artist living and working in the UK who produces vibrant abstract geometric art. 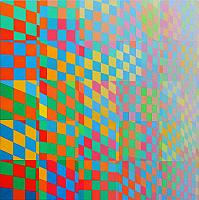 All Memory and Fate 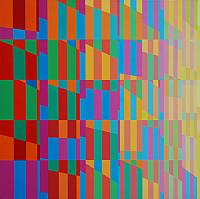 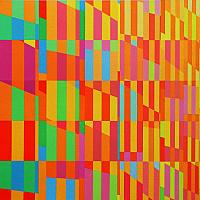 Originally a painter, in the late 1960s David gave up painting and instead concentrated on installations and film-making as this was very much the fashionable thing to do at the time. It wasn’t until 1999 that he returned to painting. Since then he has created 13 series of paintings. Starting originally with a Pop Art series, his work has gradually evolved into purely abstract, geometric art. The scientific aspects of visual perception – particularly that concerned with geometry, pattern and colour – have become fundamental to David’s work. 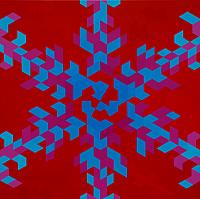 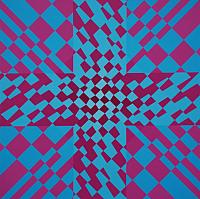 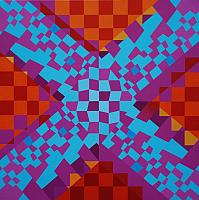 Did you study art?

Yes – I took Fine Art at Harrow School of Art and at Nottingham College of Art, graduating with the Dip AD degree in 1971.

I strive to create images which have a kinetic existence in the viewer’s perception; the ability of Op Art to interact with and interfere with our mechanisms of visual perception is something that fascinates me. My recent series of paintings have been primarily concerned with:

– Relative degrees of symmetry – e.g. symmetrical structure, but with irregular components
– Harmonies and dissonance of colour
– Patterns which can be ‘assembled’ in the eye to form large, emblematic shapes
– The role and reality (or otherwise) of after-images 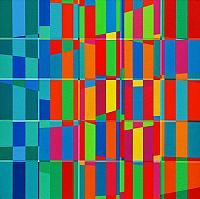 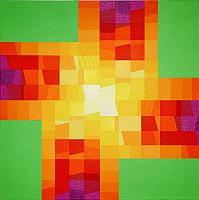 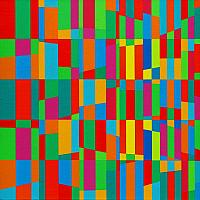 I paint in acrylic, using tape to achieve clean hard edges. Each work is fully pre-planned both for form and colour.

Who has inspired you?

As a practising painter I acknowledge many influences, from the very literary – Kitaj for example – to the makers of purely visual, self-contained experiences such as Rothko. My own work in more recent times has been of the latter type, but its major influencer was at work on my senses as an art student way back in the Sixties – the incomparable Bridget Riley. 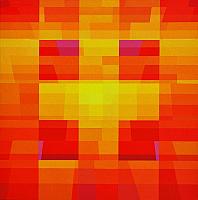 Fire in the Sun 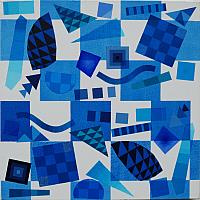 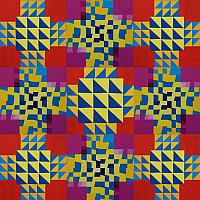 Think ‘Op’ and you surely must immediately also think ‘Riley’. However, I’m also very mindful of Bridget’s own scepticism about the application of the Op tag to work within the Sixties ‘fad’, wherein the style was used indiscriminately in popular design/decor/clothing. What you see in Bridget’s work is something far more significant than trick optical effects. And it’s a body of work which hardly any artist has ever rivalled, in terms of its sheer scale, range and continuing development.

Paul Moorhouse has summed things up very succinctly: Riley’s paintings exist on their own terms. Each work has its own character and each is self contained in the sense that, like a piece of music, its structure arises from purely internal formal or expressive considerations generated by the relationships between its component parts.

You can see more of David’s work on his website. 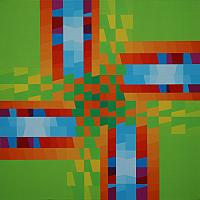 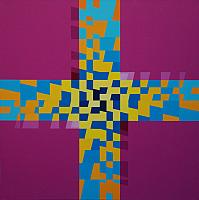 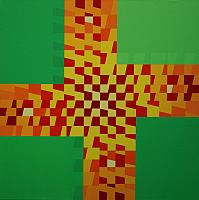 2006 Under the Influence IOTA, Ramsgate