Sara Moorhouse produces beautiful Op Art ceramic pieces out of her studio in Cardiff, Wales.  Her work has been exhibited at the Royal College at CAL and at the Saatchi Gallery at Collect amongst other places. 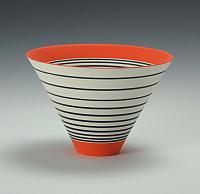 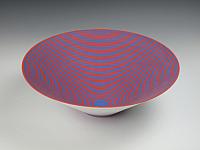 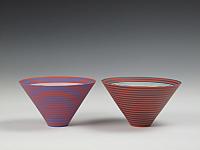 When doing her masters (in Cardiff at the UWIC School of Art and Design) in 2003, she started to explore colour and spacial perception in ceramics: “The work explores the ways in which spaces within landscape appear altered depending on the ever-changing colours of season, weather, time and farming. The bowls act as a canvas for paintings that distil specific landscape scenes, perceptibly altering the size, depth and shape of the form by the applied colour. The forms can be made to seem wider or narrower, deeper or shallower, heavier or lighter, or they may appear to undulate, bend, move or hover by the juxtaposition of finer lines. The viewing of both inner and outer surfaces together enables me to exploit colour connections and visual play from one side to another, emphasising or flattening the dimensionality of the form.”

Her latest series of work is called ‘Pulse’ of which she says:

“Through my work I explore the ways in which spaces within landscape appear altered depending on the ever-changing colours of season, weather and time. The conical forms act as canvases for paintings in which colours from landscape are distilled into bands, perceptibly altering the size, depth and shape of the form by the applied colour. Although landscape remains the original source, through my new works I have begun to explore the apparent movement and colour illusion achievable through the particular arrangements of colour and line. 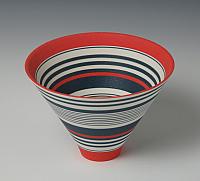 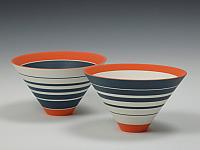 In my latest series ‘Pulse 1’, contrasting tones and varied band widths encourage the form to vibrate, pulsate and ‘breathe’. Lines either concur with the perspective of the form or do not. Inside and outside spaces contradict each other making the form increasingly uncertain as straight walls appear to curve one way and then another. Bold injections of colour at the top and base of the forms further animate them as the intense colour sings against the more monochrome linear arrangements. Furthermore, the colour adds to the uncertainty of the form as the external bright colour suggests an illusory foot and the upper bright band appears to tilt backwards, seeming to widen the form. These forms then stir and are alive and in that sense only appear in a temporary state.

In ‘Pulse 2’ equidistant lines on one surface contradict expanding lines on the other surface making the shape of the form, from inside to outside, appear uncertain. In the pair of forms ‘The Same Red’ the red bands in each are indeed the same but appear completely different due to the change in the neighbouring blues.” 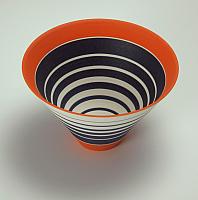 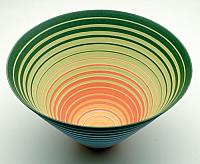 Sara’s work was recently featured in (September’s issue of) Homes and Antiques magazine.  You can find out more about Sara including where to buy her work at her website SaraMoorhouse.com.