Chris Long first developed an interest in and started creating Op Art when he studied for a B.A. in Art at Solihull College in the West Midlands (UK).  That was 7 years ago.  Since then he has completed an M.A. in Fine Art at Birmingham City University and has started his own business selling his designs in various formats and mediums.  Although in its first year, the business has been growing “slowly but steadily”. 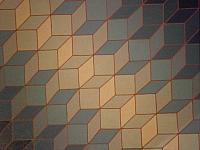 “I am fascinated by op art because of the illusions the pieces create.  I particularly like images that give the appearance of being 3D despite being painted on a flat surface and images that appear to move when they are clearly not moving at all.  I have been very much inspired by the work of Victor Vasarely and Bridget Riley; I also like the work of M.C Escher – particularly his ‘impossible’ illustrated works.”

Chris works mainly painting by hand on canvas or hard board, but has recently started creating pieces with a computer using nothing other than Microsoft Paint.  These pieces “involve creating a complex grid system – something that can be quite time consuming depending on the size and the complexity of the design – but once done, allows me to reuse this grid structure to create multiple designs.  Once I have completed a design, I change the colour of the grid lines – sometimes creating the impression that the lines are bending even though they are perfectly straight” 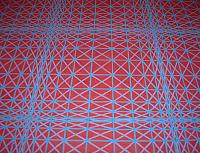 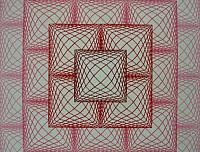 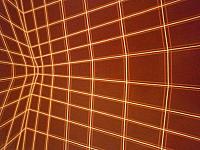 Chris was diagnosed with Asperger Syndrome soon after starting University and has found that his artwork has been a great way of helping him “deal with the many things in life that cause him stress and anxiety.”

Outside of his art, Chris is a cricket fanatic and is also a big online gamer.  “In particular, the online gaming has been a great way of making friends as I have previously found social contact quite difficult.  As part of the gaming, a friend and I make videos of the gameplay which we commentate over.  This has been a great confidence building exercise for me which I’ve found I can use in other aspects of my life”. 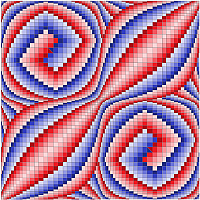 If you’d like to buy any of Chris’s designs, you can do so as laptop covers on Lapjacks, or as posters, keyrings and postcards at his zazzle store.  If you want to watch Chris’s gaming videos you can do so at his YouTube Channel.