Stephen was born in Derby (UK), and from an early age knew his vocation was to be an artist. He attended Derby College of Art and then Canterbury College of Art. At Canterbury he encountered a group of artists heavily influenced by American post-painterly abstraction as well as the School of Paris. This modernist inheritance was to shape the path of Stephen’s development. After graduating he moved to London where he set up a studio in Dalston with a group of fellow artists. Together they organised a number of exhibitions as well as producing a series of artist’s books. In 1991 he moved to a new studio in South East London until eventually joining the Art in Perpetuity Trust, in Deptford, in 1995. He has exhibited widely throughout the UK, most recently Invaluable at the APT Gallery, and his work is in private collections in the UK, Europe and the USA. 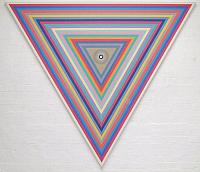 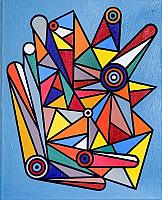 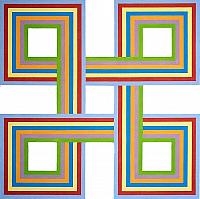 Stephen’s work is constantly informed and invigorated by a variety of sources, not only painting and sculpture (historical and contemporary) but also by music, literature, architecture and motor-racing. Travels in Europe and to New York have also provided many ideas.

Delacroix asserted that “the first duty of painting is to be a feast for the eye” and this is very much Stephen’s view – the splendour of pattern on surface, the ballet of forms in space and the visual possibilities that they generate. You can see more of Stephen Jaques’ work on his website. 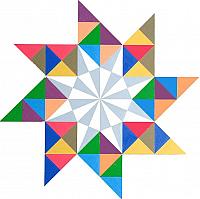 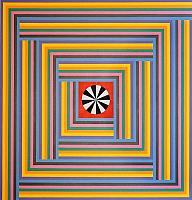 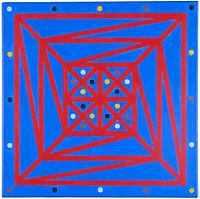