The latest update to the gallery features some of the work of Op Artist Torrin Smart. Now living in Glastonbury, Torrin has concentrated on creating exclusively Op Art based work for the previous 10 years, although it has only been recently that he has begun to show his work in public. The reason for focusing on Op Art comes from his belief that “the style has so much unrealised potential – not just to create amazing backgrounds, but to create whole worlds or universes filled with lifeforms of a geometric nature”. Although he very much admires Op Artists such as Riley and Vasarely, he does not feel ‘influenced’ by them – “I felt inspired to draw one day and this style came out almost fully formed; it seems the most obvious way to put across ideas and thought forms visually.” 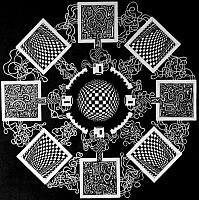 Torrin creates his work almost in reverse and usually starts with no clear idea of how the final work is going to be structured. Working purely with pencils, pens, rulers, compasses, protractors and his imagination, Torrin starts by drawing out and completing the foreground objects before beginning work on what sits behind them: “If you were to draw one of these objects as a pencil line drawing you would still not know its effect in black and white ink or later with the application of colour, so each object is fully formed before moving on to the next objective in the picture”.